Fine dining restaurant The Angler Moorgate wasn’t your typical seafood destination. I thought the best of the UK’s seafood restaurants were bright and breezy destinations like Restaurant Nathan Outlaw…Cornish sea air, Farrow & Ball blues, that kind of thing. The densely-packed, dusty, grey/brown streets and shiny high-rises of Moorgate suggested something entirely different. The Angler, is not so obviously perched atop the modern South Place Hotel and easily missed. The restaurant is accessed via the hotel, who’s lobby was reminiscent of a Dolce & Gabbana catwalk. I suspected this was Rick Stein’s personal hell. Anyway, I was soon pleasantly greeted by a charming blonde restaurant manager, annoyingly sporting a much sharper suit than me.

Inside, the elongated dining room is all reflective surfaces, shiny things, metallic bits and pieces. The Angler is a modern restaurant: impeccably co-ordinated, sexy; although more stoic than sensual. Immaculately clothed tables are well spaced out, the lighting is thoughtful and the ceiling is stunning. It’s a restaurant full of seemingly happy but very reserved diners. It makes sense for that part of London. Two Russians sat adjacent with shiny suits and shinier watches. They barely passed comment as one expensive dish after the other came and went without note, probably too focused on their latest embezzlement to care.

Thankfully, a charming Italian sommelier danced around the The Angler dining room, lifting the atmosphere somewhat. He possessed that unfortunately rare quality in a Somm of actually enjoying wine. I used to think a love of viticulture was a prerequisite of the job, but my experience now tells me I was being too optimistic. Anyway, I appreciated his graceful rapport; although, The Angler passing-off a wine made in New York (of all places) as “champagne” was questionable. Regardless, the Yankie bubbles were pleasingly yeasty fizz that went delightfully with some soft cheese-bread things.

The Angler Moorgate was obviously all about the seafood so white wine became the natural focus. With a variety of dishes ahead but the backing of a limited budget, a not horribly priced Alsacian Riesling was picked from a broad selection. The wine was versatile, displaying a ripe-peach sweetness and clean finish, a good pick if I say so myself. The choice of wine was excellent; although, could get scarily expensive. Most bottles were around the £70 mark.

The mackerel tartare was a triumph. Not quite as magnificent as the tuna equivalent at Sticks N Sushi but still dazzling. There was no escaping from the fabulous quality and vibrancy of the fish, and the delicate acidity made the dish special. Oyster cream, green apple and shiso (Japanese mint) were all well-balanced, without distracting from the main ingredient. The Angler helpfully provided a recipe here.

A relatively simple cod dish was faultlessly prepared. Other delicious fresh fishy bites materialised like clockwork and all savoured with glee. Speaking of simple, Michelin highlighted: “the kitchen has a light yet assured touch and understands that when fish is this good it doesn’t need too much adornment.” The Angler’s Executive Chef Gary Foulkes, used to be head chef at the previously two Michelin-starred restaurant The Square, so he knows better than most what Michelin are all about.

That said, the surprising highlight of The Angler was the beef ravioli in a truffle consume. I can still taste the incredible flavour combinations and is up there with the best dishes I’ve ever tasted – simply out of this world. It was that rare kind of dish that made me want to leave the restaurant and hug not just the head chef, but everyone in the kitchen.

I liked the contrasting nature of the two desserts on the The Angler Tasting Menu. One light, refreshing, fruity but still with contrasting textures. The other, a black hole of captivating chocolate – too rich for my taste, but I guess that’s the point. The final petits were glamorous and glossy. I could have lived without the bits of gold foil, but the Russians probably approved.

Other than the forgetting of a celebratory birthday message prearranged when booking, and some inconsequential confusion with the jackets, service at The Angler Moorgate was impeccably timed and completely composed and astute.

The Angler Moorgate was a serious and stylish seafood restaurant that well deserved its Michelin star. The restaurant’s premium location and suave interior was reflected in the premium price point. That said, check The Angler Offers Page, as I dined very reasonably considering the above.

Other Restaurant Reviews
of The Angler Moorgate

I wanted to love L’enclume, I really did. Never before had I booked a restaurant six months in advance and spent more than a weeks pay on one meal for two. Any restaurant that employs a full-time ‘forager’ activates my almonds and my excitement on the morning of the L’enclume booking was palpable. I felt like I was getting married.

The restaurant is a charming, eight-hundred-year-old former smithy. L’enclume means ‘anvil’, a homage to the former blacksmith’s workshop housed. I’m a massive fan of Simon Rogan, and unlike many chefs, has a more modest ego. His food philosophy is “a case of growing the perfect carrot rather than cooking it perfectly.” He knows he can already cook it perfectly but the point is two-fold. One, excellent quality ingredients should require as little cooking – read interference – as possible. Secondly, although cooking is undoubtedly skilful, the real challenge is in producing the ingredients in the first place. Simon Rogan puts the suppliers in the limelight, and lets Mother Nature do the talking. To quote:“My dream menu would serve 20 raw courses, but I know [he laughs] I’d never get away with that.”

I know Simon Rogan hates comparisons between L’enclume and The Fat Duck, but they are oddly similar in the superficial sense of you’d walk right past them both without a second thought. Both look like large cosy cottages, opening directly onto the quiet road, with barely a suggestion world-class activity was busy inside. Both blend into the background, nestled between residential houses, in tucked-away villages.

I was left with mixed feelings due to the expense and the operational issues. That said, L’enclume made me feel genuinely proud; therefore the meal was memorable. Simon Rogan stayed true to his word: “I decided to keep it British, celebrate the north-west and eliminate all foreign stuff. You can’t just say, ‘Right, that’s it, we’re never going to use a lemon again’. You need to identify alternatives otherwise your food is going to be crap.” 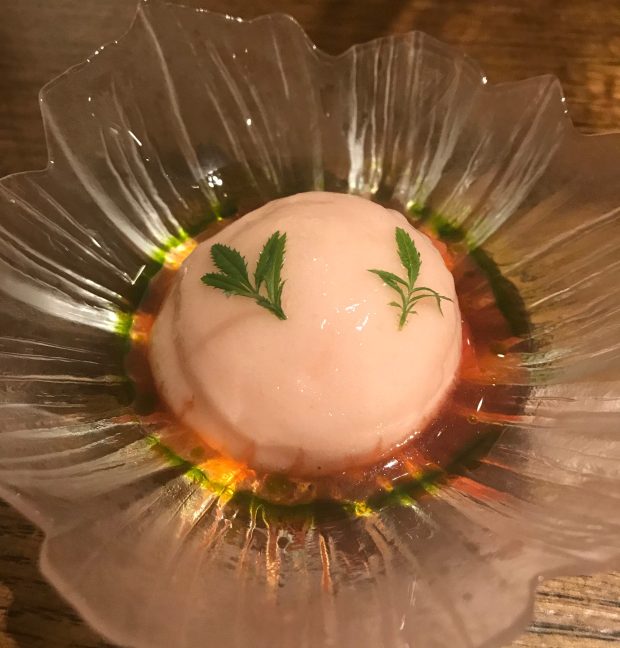 Northcote, (formally Northcote Manor), surrounding by sodden pastures and grey skies, is home to Lancashire’s only Michelin star, fuelled by the formidable Nigel Haworth and Lisa Allen. I thought what better way to congratulate Jesus on rising from the dead, then sniffing out posh Sunday lunch in his honour?

Despite not being particularly stretched, a sense of Northern and Michelin hospitality was undermined by walking both in and out of Northcote without acknowledgement of any kind. It was quite obviously pissing down, yet neither my coat nor dripping umbrella was offered to be removed.

Inside, the lounge area was comfortable and the bar was well-stocked, if not cluttered. Despite Northcote fairly recently having a makeover, I’m not sure the grey, pink, and orange upholstery worked with the period wood panelling. After waiting around for some time, the abrupt host was permanently set on rapid fire: “Have you decided – what would you like – what can I get you?” This unsettling briefing, was contrasted by a sedate dining room. Once seated, the smartly-presented young Northcote team were very cordial and well-organised, but without a sense of occasion. The views of the pretty kitchen-garden in the foreground and rolling hills in the background provide a pleasant back drop, so window seats are recommended.

The amuse bouche had the bittersweet honour of being Northcote’s highlight. Melting magenta shells fleetingly fizzled, birthing a tart, sizzling beetroot flavour, that slapped my taste buds ’round the chops in no uncertain terms.There was no choice but to accept the Jacket Potato Soup, which was more butter than jacket. The trendy foraged herbs added freshness, although someone’s hair added the opposite. Although this was swiftly dealt with, I doubt a Michelin inspector would have forgave.

The beetroot starter was one the prettiest plate I’d ever seen: vibrant hues and floral shapes, elegantly intertwined in an act of vegetarian poetry. The sweet and acidic elements energetically danced but lacked a focal point. The alien looking Duck was heavily entombed but worked affably alongside the uplifting sorrel, even if it did look like Cousin It.

For mains, the salmon proudly commanded the plate, yet unselfishly yielded to the fork’s graze. The boldly-seasoned fish and convivially sweet roe double teamed the earthy mushrooms, creating a bravely balanced dish which spoke of land and sea in matrimony. The little pops of orange added a touch of vibrancy. While the Japanese influence of soy, shitake and ikura (roe) worked charmingly. The thoughtfully composed lamb was quality dead baby sheep, locally sauced from Bowland, but lacked a je ne sais quoi. It was so rare it walked through the Northcote kitchen. In the two seconds it spent cooking, it was however properly seared and heartily seasoned. The mash was superlatively silky and the scorched and pickled onions added textures and talking points.

Regarding desserts, the trio of British cheeses were delicious, especially a terrified looking puddle of something Brie related. More crackers and less bread I’d suggest though. Northcote’s cleverly crafted cream egg was an enchanting nod to the season, providing deftly constructed contrasting textures, although anything white chocolate and hazelnut is a winner for me.

Fantastic Feasts & Where To Find Them